Birds and the Bees, Sallies and the Streams

Well, not streams per se. But, with it being the season of pollen, green-up, and breeding comes the great breeding migration of the Spotted Salamander (Ambystoma maculatum) and the hatching of the Marble Salamander (Ambystoma opacum). Since the winter was so warm, breeding came early. In February, larvae of both species were swimming around in the vernal pools of Piedmont. 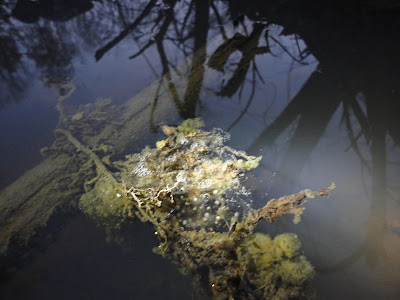 A Spotted Salamander egg mass floating and hidden among vegetation.
The Marbled and Spotted Salamander have larvae that are deposited as eggs into vernal pools throughout the Southeast,  parts of the Midwest, and parts of New England. The Spotted Salamander's distribution also reaches into areas of Canada (Conant & Collins, 1998). Vernal pools, sometimes called ephemeral ponds, are seasonal wetland depressions found in woodlands. They fill during the winter and spring, and they dry during the summer and fall. Because they dry out, no fish can inhabit them--perfect breeding grounds for amphibians.

In the Piedmont of North Carolina, the hatching of the eggs for both species occurs simultaneously, and it can be difficult to distinguish between the two larvae. However, the Marbled Salamander larvae have black pigment on their throats and are typically larger (Mitchell & Gibbons, 2010). Both species have bushy external gills, tails for swimming, and two well developed forelimbs. Hind limbs develop during the larvae stage. 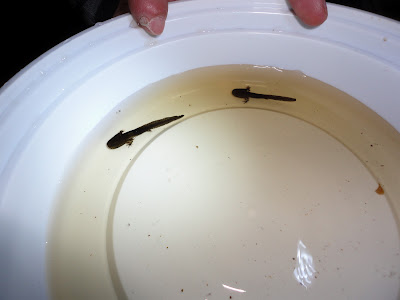 Two Marbled Salamander larvae.
Notice the tiny hind limbs and external gills.
The fascinating thing about these two species is not their aquatic larvae. Instead, it is the amazing journey the adults undergo in order to mate every year to two years. Both species are the only salamanders to mate on land. Marbled Salamanders migrate after mating occurs in October or November, and they lay their eggs in the dried ephemeral ponds. The eggs will only hatch after being inundated (Petranka, 1998). 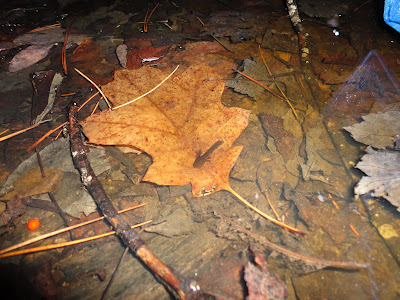 A Salamander larvae in its natural habitat,
unaware of the looming net about to scoop it up!
Even more dramatic than that, Spotted Salamanders will migrate to breeding grounds during moist nights in late winter and early spring and will lay their eggs in flooded pools. It is unknown as to how salamanders orient themselves directionally, but they can travel great distances (200m-500m) to meet for the mating season (Petranka, 1998). For something only 22cm, that is a long way to go! Imagine having to go 900 to 2250 times our body size to find a mate. 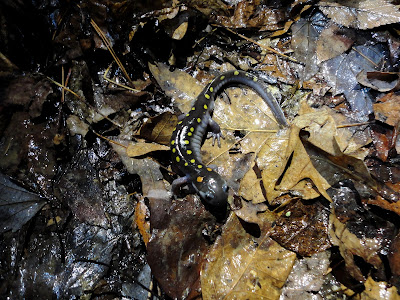 An adult Spotted Salamander. Found under a log
next to the vernal pool.
Unfortunately, given the migration patterns of the salamanders, there are great concerns for the survival and conservation of the two species. Besides the loss of ephemeral pools, habitat fragmentation by roads has isolated adult habitats from breeding grounds. With the small size and slow movement of salamanders, it is easy for them to be killed by motorists.

Hopefully you will have the chance to see one of these fantastic creatures! The best part is that they can be as far away as your backyard or local park.

Petranka, J.W. 1998. Salamanders of the United States and Canada. Smithsonian Institution Press, Washington D.C.
Posted by Piedmont at 10:59 AM 2 comments: