Well, it's getting that time of year where all the animals are getting frisky. Many of the amphibians are waiting for their larvae to hatch, and some are in the race against time to metamorph for terrestrial life before their breeding pools dry up.

Now that it is getting warm enough for the reptiles to stir, their season of reptile love (and war) is starting to begin. In particular, I came upon a male Northern Fence Lizard (Sceloporus undulatus) trying to woo a female in courtship. Typically, fence lizards do push-ups to mark their territory and to signal that other lizards should stay away; however, in this case, there is a male and a female fence lizard present, so I am guessing it has more to do with that than anything else. For the fence lizards, mating season typically begins in April. On top of their macho push-up routine, males will also use a pheromone to attract a mate.

Maybe it is because I interrupted the process, but I don't think the female showed much interest. (For both videos, play in higher resolution).

Please forgive the disenchanting narration. My coworker called to tell me he
had found a snake.

In part to attract a female, but also to show how tough they are, males also have a bright blue coloration on their belly and neck. Thus, when the lizard conducts their push-up routine, the colors are flashed as the lizard goes up and down. One way to tell the difference between a male and female is that the blue color is much less intense on a female, and it often is less apparent on the neck. Below is the male, and from this angle you can see the blue much more vividly (The blue doesn't show up unless it is played on the higher resolution youtube setting).

If the mating is successful, the female will be in gestation for about eight weeks, after which she will lay the eggs under a few inches of soil. This will help regulate the temperature of the eggs. Depending on when the eggs are laid, they will hatch between June and September. The size of the female determines how many eggs are laid, and it ranges from 3-13 eggs per clutch. During the year, a mature female can have multiple clutches. Younger females (1 year-old), typically only have one clutch per year.

As these are a very common species, I'm sure you all have been seeing them moving about now that spring is here.

Posted by Piedmont at 8:26 AM No comments:

Odin to a Bobcat


He gave the orb of an eye to Mimir's Well,
and in return sound counsel bequeathed.
My own eye watched,
wrought of glass and wire,
Upon the bark of Yggdrasil it waited in steel sheathed.
On the path through the wood this avatar did tread.
The wanderer, Asgardian, the Allfather
filled Midgard with dread,
yet this forest deity I did bother,
and now too I must search for an answer.

Thank you for indulging my amateur attempt at the ode form of poetry. Also, please excuse the terrible pun titling this post.
So you are probably asking, what is all the theatrics for? Well, at my new temporary playground in the Midwest, I have gotten an interesting set of pictures on my camera trap. Not too long ago, a one-eyed bobcat (Lynx rufus) made his way by my camera trap, and considering my the gadget had only been up two weeks, I was pretty ecstatic to see it! In my past experience, such camera-trap captures are infrequent to say the least. 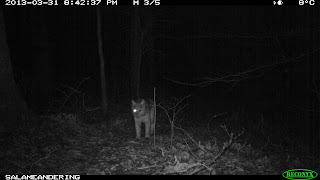 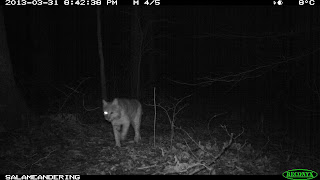 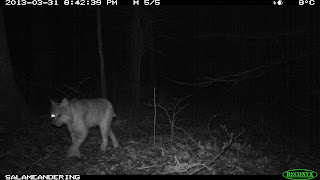 Bobcats are nothing new in North America. The oldest fossil they have of a bobcat ancestor is from 2.4-2.5 million years ago (Anderson & Lovallo, 2003). Even though the current distribution of the bobcat spans from coast to coast and from Canada down to Mexico, they have restricted ranges in certain states.
Now I am not sure if the Odin bobcat I got a picture of is big or small, young or old. My guess is he is a male, though, and that arises from the fact it is breeding season, and females move significantly less than males (see Anderson & Lovallo, 2003). Either Odin has seen some battles and has successfully protected his territory from other cats, or he is down on his luck and has been fended off by some bigger males.
It is also quite possible that I got pictures of two different cats. The photograph from the 24th looks a little more husky and large, yet when they are both nearest to the stem in the center they are around the same height. The individual from the 31st seems to have more spots on his legs. It's plausible that they are two different individuals. In terms of movement, adult bobcats can move over 2 km in a day (with a home range around 40 km^2 depending on region; see Anderson & Lovallo, 2003). When it comes to younger cats dispersing, it is not too uncommon for individuals to move more than a couple hundred kilometers in search of adequate habitat. 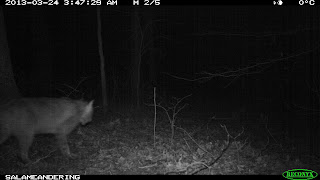 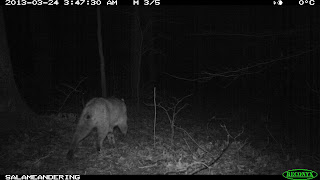 Either way, it is a neat series of pictures. I would be interested to hear your thoughts.