It's been a while since I've posted true to my namesake, and considering my past field job revolved around salamanders, it is high time to share some salamander knowledge.

While conducting salamander surveys in the foothills of the Appalachian Mountains, a certain pattern arose between two salamander species studied at a contiguous forest. The first species, Plethodon cinereus (Red-back Salamander, Plethodon Greek for "Full of Teeth", and cinereus Latin for "Ash colored") is one of the most thoroughly studied salamanders in North America. They are prominent throughout much of the eastern and northern United States. 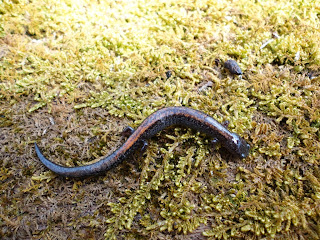 The second species is Plethodon electromorphus (Northern Ravine Salamander, named after the process of electrophoresis that was used to determine it as a different species from P. richmondi). This species has not received as much research attention, but the Plethodon genus of salamanders are often hard to study due to their cryptic nature and subterranean habits. During the summer and winter, P. electromorphus can be as deep as 1.2 meters below ground. 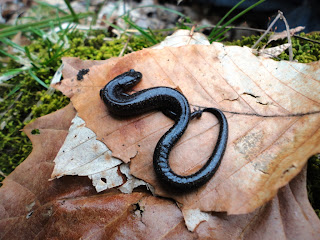 After many weeks of surveys, it became clear that the two species were not occurring in the same local habitat at all, despite having noteworthy numbers of captures at survey sites within a mile of each other. There could be several different explanations for this pattern. For instance, P. electromorhpus prefers rocky outcroppings or rocky slopes within forests. P. cinereus is most abundant in mature forests with well-drained soils and plenty of woody debris. 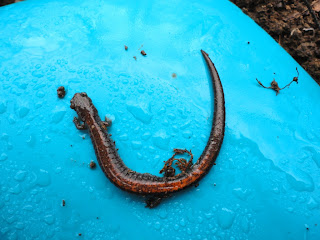 Although it hasn't been noted in the literature between these two species, it is possible that they exhibit strong interspecific competition. In diet, foraging behavior, and morphology, the two species are very similar. They consume invertebrates of several orders, forage at night, and require moisture along with cooler temperatures to be active on the surface. Their activity schedules are mostly tied to their mode of respiration and consequent physiological requirements. Could it be possible that these two salamanders are an example of the competitive exclusion principle? Or, are P. eletromorphus only locally abundant? 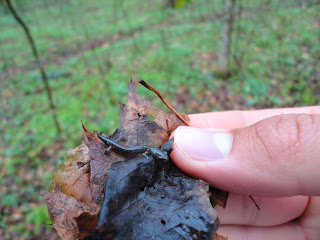 A juvenile P. eletromorphus. It weighed 0.6 grams and was less than 11 mm total length.

Considering the habitats in which these traps were located--well-drained soils, rocky slopes, woody debris, moist leaf litter, mixed deciduous hardwood forest--there is no reason both species could not be present. The traps where P. cinereus were found was drier and had less ground cover, so it would not be a moisture problem. Even if the Ravine salamanders were only locally abundant, there are no noticeable/obvious habitat characteristics or environmental factors that would hinder Red-back salamanders from occupying the same area as them. Given the fact that P. cinereus are also more aggressive and territorial than P. electromorphus, it should be the former imposing on the latter and not the other way around. All in all, it was an interesting trend to see emerge over the course of the surveys, but I cannot make any assertions one way or another.