Settling Down and Shoring Up

Well, it has taken me a while to write another post, but I am back! My position at the refuge in New Jersey wrapped up nicely, and I have settled into a new job on the Eastern Shore of Virginia. 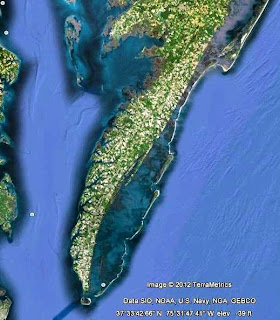 The Eastern Shore, formally known as the Delmarva Peninsula, has the Chesapeake Bay
to the West and the Atlantic Ocean to the East. Note the barrier islands. Image from Google Earth.

The project I am working on is part of the Virginia Coastal Reserve Long-term Ecological Research (VCR-LTER) initiative. While this initiative has a variety of components, I am specifically working on small mammal surveys (voles, mice, shrews, rats) with a professor who has researched the shore's ecosystems for many years.

The project will take place across the shore: 2 mainland sites and 19 or so barrier islands. Part of the study will compare small mammal diversity to surveys conducted approximately 20 years ago. Having a benchmark of the species currently found on the islands will also provide good reference for similar studies conducted in the future. The barrier islands provide many ecosystems services, and they are rapidly changing in habitat composition and size. Thus, the small mammal work will help in understanding the biogeography and ecology of the greater barrier island ecosystem. 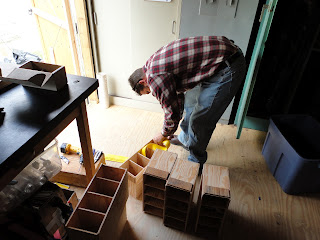 My colleague, J. Sparks, working on reinforcing trap boxes, attaching straps,
and soon to be waterproofing them. Each box holds 32 folded traps.

Before trapping can occur though, the equipment had to get arranged. As some sites will have upwards of 200 traps, solid preparation is key. The type of traps used are collapsible Sherman live-traps, which are are effective at capturing small mammals and also are a survey method that have relatively high capture rates.

Getting everything together involves preparing trap boxes to carry them in, cleaning the traps, making sure all parts of the traps function, and creating the baits for the traps. Normally, baits for these traps are peanut butter and a grain (like rolled oats); however, our trap baits are a combination of shortening (Crisco) and cracked corn, both of which are easy to digest by the animals and also reduce trap mortality during cold temperatures. 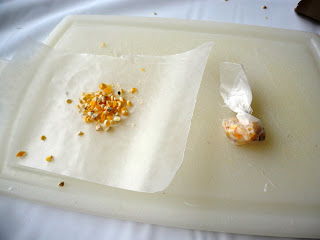 Extra baits will be used for trick-or-treaters on Halloween.
They look close enough to candy. Just kidding. 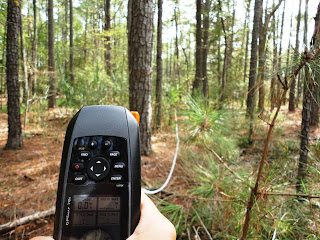 Using a GPS to mark the beginning of a transect and to
set a bearing. Then the line is laid and flagged.

Before traps are armed and ready for critter abduction, they are laid in transects (lines) that run through multiple habitat types to survey all small species at a location. Traps are then fixed open and baited to attract but not capture the mammals. Once they have acclimated to the presence of the traps (~48 hours) the arming of the traps ensues (and the results of those endeavors will be shared later!). All animals captured are released after measurements are taken. 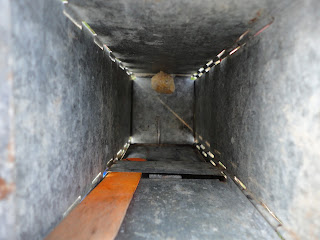 The bait is hung inside the trap from the back door, forcing the animal
to walk generously on the treadle which trips the front door. For baiting,
a tongue depressor is used to prevent the closing of the front door. 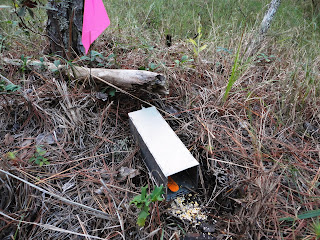 Complete with holly and pine-straw landscaping, here is what the
Sherman trap looks like all set up.

On the next post I will begin the first of many species accounts from the animals we capture during the surveys.