Predation, or when one organism eats another, is common a phenomena at the dinner table. Out in the wild though, predation has a mythic quality to it: we know it happens, be we rarely get to see it. Fortunately, I witnessed such an event this past weekend.

While hiking on the boardwalk at a local marsh (as part of a birding competition no less), I couldn't overcome my habit to continually look at the ground. Out of the corner of my eye, I saw a rather perplexing shape. It had the scales and pattern of a snake, but it was big, round, and short. It took me a second to realize that I was looking directly down onto a water snake in the middle of eating a frog.

Upon closer inspection, it was a Northern water snake (Nerodia sipedon "serpent flowing through causing decay", Greek) eating a green frog (Lithobates clamitans "yelling one who haunts a stone", Greek; maybe this predated individual should be re-classified as Lithobates calamitati "misfortunate one who haunts a stone"--etymology joke!). Northern water snakes are active hunters, and they can use both olfactory and visual cues to hunt for prey. They are solid swimmers with physiological adaptations for increased blood oxygen capacity. As a result they can stay submerged in water for over an hour (65 minutes). 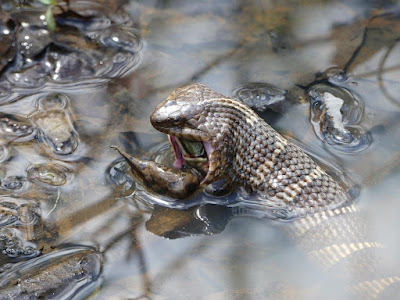 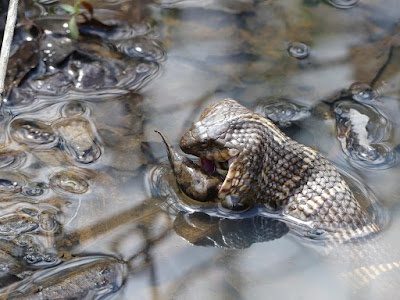 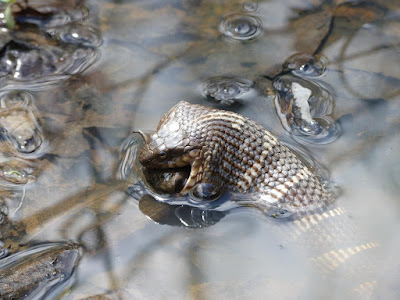 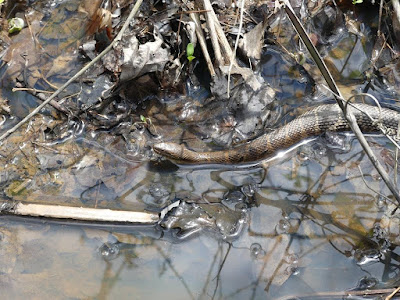 The water snake slowly swallows the green frog. The frog is so large,
the snake must unhinge its jaws to swallow the frog whole. Coming back
30 minutes later, you can see the frog is now midway down the snake's body
(bulge near the stick in picture four).

The diet of Norther water snakes is mainly comprised of fish (50-96% of diet by volume, 56-90% of diet by frequency). Most species consumed are rough fish (a term simply meaning that anglers don't care too much for them as sport), and many are consumed as carrion. Amphibians make up the rest of their diet, but they are often eaten less frequently (4-52% of diet by volume, 17% of diet by frequency). Nevertheless, Northern water snakes are a generalist, and they have also been documented to eat shrews, crayfish, leeches, and a whole host of other animals. In the case of our misfortunate green frog above, we don't know where the green frog was actually caught. Northern water snakes can hunt on the water's surface or swim underwater to hunt. As the case is here, prey are usually brought to a shallow area of water to work about in the mouth.

Unfortunately, Nerodia water snakes of all kinds are often confused with cottonmouths (Agkistrodon piscivorus) an aquatic venomous viper. Nerodia actually have no venom, and their first instinct is to escape by swimming or diving. Otherwise, when harassed, they have a vile temper. Just think, it's probably because they could be fishing instead of dealing with you!