Volen't You Leave My Plants Alone

Voles. While there are 32 species found in North America, there are two primary species in the east that are commonly found in grasslands, woodlands, and your garden. This includes the meadow vole (Microtus pennsylvanicus) and the woodland vole (Microtus pinetorum). While these two relatives occupy different habitats, they play a vital role in ecosystems, and they can have serious effects on habitats when they reach high densities.

The meadow vole is generally larger, reaching almost up to 8 inches. Voles can be distinguished from other rodents by their noticeably short tails. As long as there is dense vegetation at the ground level, meadow voles can be found in most grass dominated habitats north of South Carolina--marshes, fields, meadows, orchards. Interestingly, meadow voles create elaborate tunnel systems in the vegetation called runways. The meadow vole can burrow, but its runways are its hallmark. Along these runways they forage for herbaceous material, seeds, insects, and fungi. Meadow voles exhibit very unstable populations. They can be very abundant one year but barely detectable the next. 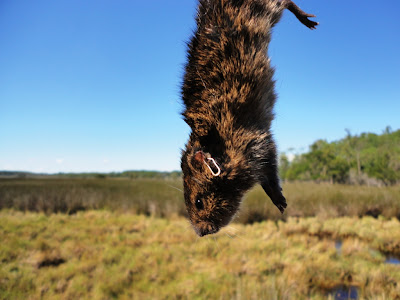 I believe a friend of mine put it best: "Meadow voles are like giant ground sloths, man."
Of the rodent world, of course. 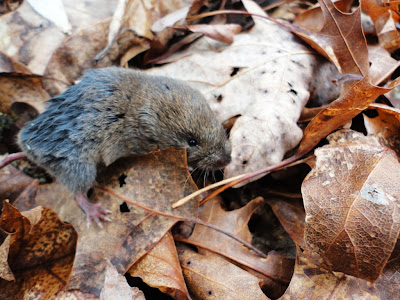 A smaller creature in stature, this species has larger forepaws adapted for digging.

Both of these species are staple foods for many predators: foxes, coyotes, raptors, and snakes. In some areas, they may be the dominant small mammal and therefore play a significant role in ecosystem energetics. However, these species are probably most notorious for their multi-million dollar destruction of orchards, farm fields, and nurseries. Particularly during the winter, diets in both species shift to bark and root consumption. Sometimes this can lead to the girdling of trees. Gardeners also loath the vole, for their shallow tunnels are often seen leading to dead plants or consumed vegetables. Moles are often blamed for the damage, but moles are carnivorous.

Even though the meadow vole and woodland vole are important species in their natural habitats, they provide a good example of how wildlife can cause conflict when natural habitats and human habitats meet.