What about fossil fuels is fossil? Some might say the "fossil" part comes from the fact that it is a rather outdated source of energy. Driving past the exhausted oil fields of Texas, it could certainly be said that it leaves fossils. Yet, as many of us know, they are fossil fuels because they are the organic, compressed remains of living things from ages past. 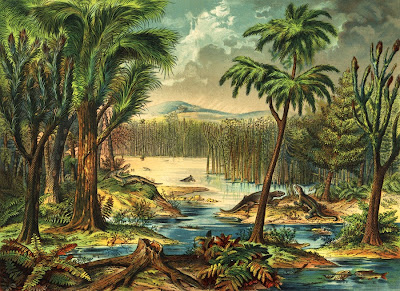 Specifically, most of our fossil fuels come from the Carboniferous Period, which occurred between 359 million years ago (mya) and 299 mya. Appropriately name, "carboniferous" means "coal-bearing". It was a time when arthropods and amphibians dominated terrestrial ecosystems, and it was a time when giant ferns, mosses, scale trees, and ancient gymnosperms densely forested the land. Interestingly by the late Carboniferous the amniotic egg had arisen which opened the door for modern birds, reptiles, and mammals to evolve 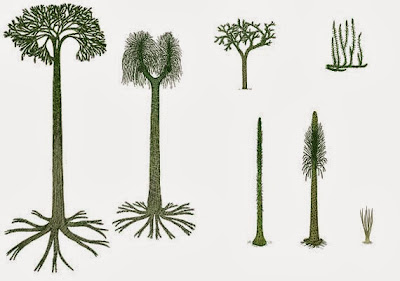 Reconstructions of Lepidodendron (far left, Late Carboniferous, ~50 m tall), Sigillaria (left, Late Carboniferous, ~40 m,), Valmeyerodendron (middle top, Early Carboniferous, 0.6 m), Protolepidodendron (top right, Middle Devonian, 0.2 m), Chaloneria (bottom middle, Late Carboniferous, 2 m), Pleuromeia (bottom right, Triassic, 2 m) and Isoetes (bottom far right, extant, 30 cm). Courtesy of Devonian Times and Dennis Clark (c.)
.
While all of those ancient animals and plants give us electricity, I want to focus on one group of species that are commonly found as the other types of fossils. Lepidodendron, also known as scale trees, grew over 100 feet tall and are most closely related to quillworts and club mosses. The largest fossil found was a plant ~6 feet in diameter. Despite its name, it was not what we would botanically consider a tree today. Considering its height, the plant did not contain much wood at all, and it was supported by an extremely thick, scale-like bark/skin. The scales of the giant tree herb provide for rather iconic fossils--just like the one I came across in the western Appalachian foothills of Ohio. 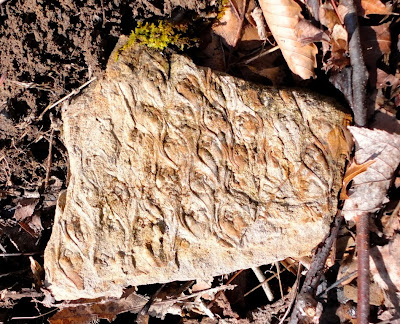 From what can be gathered from the fossil record, these trees were tightly packed wetland plants. Because of their growth pattern, 1000 to 2000 trees could squeeze into a single hectare. Imagine a giant trunk with a large clump of grass at the top, and you essentially have a Lepidodendron in mind. It wasn't until the plants reached a mature stage that they had branches. It is estimated that these plants reached maturity in 10 to 15 years and would disperse their spores from cone-like structures.

If you want to enjoy Lepidodendron as a fossil and a fossil fuel, you have the best chances of looking near shale rock.