On the Road Again

Most normal people would not consider any road kill all that special, particularly if it is a snake. Even though I am human, I most likely wouldn't fit the bill for being normal. Naturally, when I saw a Eastern Common Garter Snake (Thamnophis sirtalis sirtalis) dead on the road, I had to pull over and snag it. 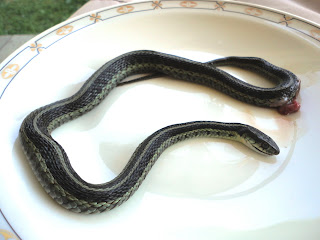 The specimen in question. Depending on the subspecies,
it can take two the three years before females can reach reproductive maturity

Now, even further from being normal, I decided to dissect the snake so that I could try and get a whole snake skeleton to put together as a model. It was also a unique opportunity because she was gravid, and you could feel the embryos in her gut.

Common Garters are not having too hard of a time compared to most snakes, but it is still sad to see a gravid female killed by a car. There were a total of five embryos inside her. Garters are ovoviviparous, meaning that they produce offspring within an amniotic sac and give live birth. It takes 80 to 90 days for gestation to occur (depending on environmental temperature), and a female can birth between 1 and 101 offspring depending on size and maturity. Females will only breed bi-annually or tri-annually. 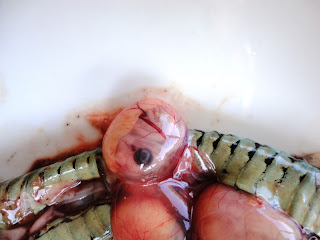 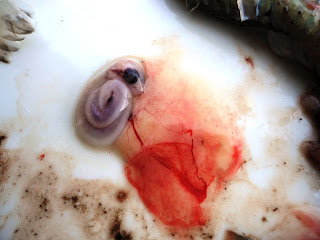 One of five embryos inside the snake. It's rare to get to see offspring
mid-development. The top picture shows the developing snake inside its own membrane.
The second shows it outside of the membrane.

Interestingly, the Common Garter snake is the northernmost snake species in North America. This is because it can tolerate a wide range of temperatures and can even survive being frozen for brief periods of time. Found in a variety of different habitats, the snake is most commonly found near wet areas. As there are many subspecies of this snake, coloration, diet, and behavior can vary drastically.

The Common Garter Snake is also the most deeply studied snake in North America.

For more info, see Snakes of the United States and Canada by Ernst and Ernst