I'm not sure if you have read any of the books in the Redwall series by Brian Jacques, but as the main characters are mostly small mammals, you can bet I will shamelessly make references to the series during these mammal profiles (If you haven't heard of the series, it is similar to Watership Down).

So far during our trapping endeavors, we have captured 5 different species of small mammals. One of my favorites, the least shrew (Cryptotis parva, Greek and Latin for "small hidden-ear" shrew), is the first animal I'm going to discuss. The least shrew is in the diverse and complicated order Insectivora (insect-eating and carnivorous mammals). Within that order, they are classified in the Soricidae (shrew) family, a group containing some of the smallest mammals. Characterized by their small eyes, pointed teeth, and long tapered snout, this species relies mostly on its sense of smell and hearing to move and locate prey. 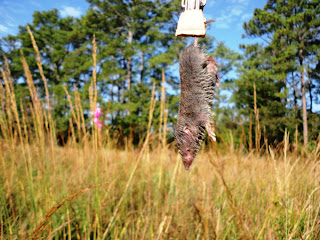 Least shrews are very vocal, using clicks and squeaks to communicate.
In this case, they are mostly communicating, "Stop weighing me and let me go."

The mammals are very small, growing up to 92 mm in length--including tail--and weighing up to 5.7 grams, the weight of a nickel. Although small, they are voracious eaters and busy critters. They are almost always active and only have short periods of rest. Part of this arises from an incredible metabolism: having to eat 50% of their weight or more every 24 hours. The least shrew consumes large amounts of arthropods, worms, and other insects. For some insects that are too large to consume whole, the shrew will eat out the insides. They also are a food source for many other animals, including snakes, raptors, foxes, and skunks.

While the least shrew is often confused with members of the short-tailed shrew genus (Blarina), the least shrew is distinguishable by its tail, which is less than half the length of its body and head. Behaviorally, the least shrew also is rather social, as nests can have up to two dozen individuals. These nests are usually found near logs, rocks, and debris, and they are made out of shredded grass and leaves. 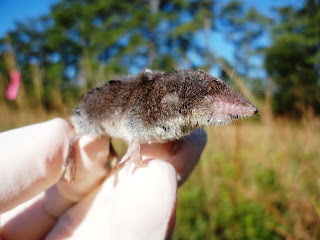 Unfortunately, due to their energetics, it is not rare to have shrew mortality.
Sometimes the shrew cannot survive the time in the trap, but all possible measures are taken to avoid it. 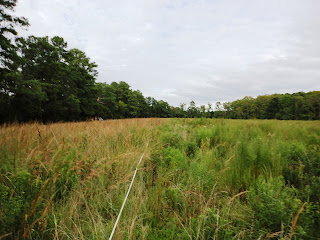 The old-field habitat in which we surveyed and found the majority
of our least shrews.

The least shrew is mostly found in dry, open grasslands, but they also are found in saltwater marshes.  Typically, the Sherman live trap is not the best method to capture shrews, but we set the trap's trigger to close at a lighter weight.