For those who do small mammal surveys, it is never unusual to get a white-footed mouse (Peromyscus leucopus, "Mouse with White-Footed Boots"). Both the white-footed mouse and its close relative the deer mouse (Peromyscus maniculatus "Agile Mouse with Boots") are the most populous mammals in North America. So, while they might not be the most exotic species to capture, they certainly play an important role in ecosystems. 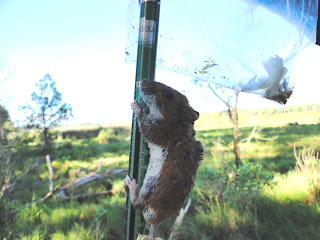 Interestingly, the white-footed mouse has not colonized many of the barrier islands off the Eastern Shore, with the exception of four islands (Assateague, Wallops, Cedar, and Fishermans; Moncreif and Dueser, 1994). While there is certainly great habitat for them, they have not been documented on any of the other islands. This is surprising, as P. leucopus has great homing abilities and has well documented swimming abilities. It could be that the intercoastal water conditions are too prohibitive. 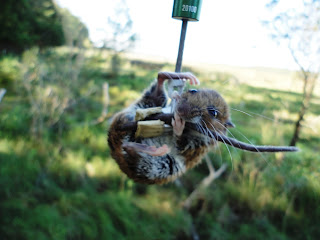 There is no scientific merit to this picture, except that the mouse looks funny while
trying to bite the Pesola scale so that it can escape. Actually, wriggling and biting, besides their speed,
is their only defense once captured by predators.

White-footed mice have also have become a public issue these days. Whether it is because of a change in predators, climate, or habitat composition, white-footed mice have come under increasing attention due to the higher incidence of Lyme disease and hantavirus--both of which they are carriers of. Even though their higher densities equate to human health concerns, the mice play an important role in linking food webs, as they their omnivorous diets are transferred to larger predators like foxes, bobcats and raptors (many of whom consume large amounts of the rodents). Economically speaking, mice consume large numbers of seeds from weed plants as well as insects and generally avoid cultivated areas. Despite this, the wildlife disease consequences of their current success is a central facet of current research.

This species favors hardwood forests as well as the edges of forests and fields. On the shore, they are found in myrtle shrublands and marshes. While typically not hallmarked for their presence in coastal areas, they also seem to abound in drier mixed hardwood-pine forests.