Despite Hurricane Sandy's best efforts, Eastern Shore of Virginia has survived the strong winds and the high waters. Power was only lost temporarily, and the flooding was minimal. To many this may be surprising, but the Virginian section of the Delmarva Peninsula still has many of its natural fortifications. Almost all of the barrier islands off the coast are wilderness, and there are expansive salt marshes between the shore and the islands--not to mention extensive oyster and shellfish beds. All of these reduce wave motion and act as a shield to hurricanes. This is a fine example of ecosystem services, processes which ecosystems perform that benefit humans. 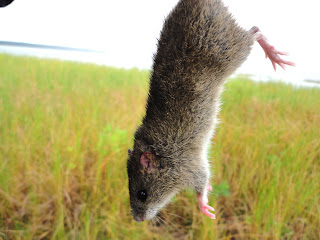 Compared to Norway rats and black rats (the invasive beast and
the grungy city-dweller, respectively) The marsh rice rat is a rather handsome rodent.

But, the real reason we are here is because we want to learn about the robust, ever-versatile marsh rice rat (Oryzomys palustrus, "Marsh/Swamp Rice Mouse"). As it is semiaquatic, these mid-sized rodents flourish in marshes and the Atlantic coastal plains. Their distribution ranges from Texas through the Southeast and some parts of the Midwest, up to New Jersey. 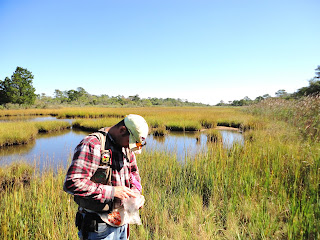 Marsh, marsh edges, and the surrounding uplands all are likely
places to find this species. Here, my colleague J. Sparks works along
one of the trapping lines.

As their name suggests, they are bountiful in all types of marshes (saltwater and freshwater), and are able to swim great distances, sometimes holding their breath underwater for long periods of time. The longest I have counted so far is 17 seconds. On the barrier island system they have been reported to swim distances greater than 50 meters across deep channels, no easy feat for an animal that is usually smaller than a soda can. Because they are a truly hardy species, the presence of the marsh rice rat is almost the "100% guarantee" of small mammal trapping on the barrier islands we are surveying. Even on islands that are constantly shifting or are barely an island at all, a rice rat will be present. Thus, they are important players in understanding biogeography, the discipline that tries to understand how populations of species vary and function over different landscapes. 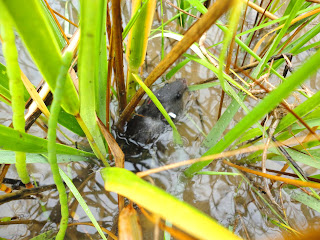 After taking measurements, this guy went on a nice underwater swim and hid in the grasses.

Another rat wanted to demonstrate its swimming abilities for the camera. Given that water
causes rapid temperature loss, it is curious to think about how these rodents survive during
colder months after being submerged. It probably has significant energy consequences.

Marsh rice rats are true omnivores and will generally eat most things they come across: plants, seeds, snails, insects, fiddler crabs, mollusks, and some eggs of marsh-nesting birds. They also are an important food  for marsh hawks, owls, snakes, and mammalian predators such as fox and mink. Thankfully, they are not too much of a hassle for human beings. Because of their habitat preferences, they rarely infringe on human endeavors and become pests. 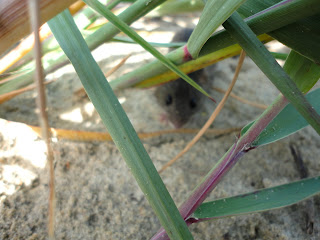 Unfortunately, these animals are quick, and this is the only natural picture I have been
able to capture. These species are also gutsy, inhabiting grassy dunes and making sprints
across open sand.