Torpor Affects Us All

Despite the unusually warm winter (2012 being the hottest year on record for the continental U.S.), even I succumbed to winter torpor. Good thing I stocked up some energy with all of the holiday treats!

Diverging from our small-mammal accounts from my time on the Eastern Shore of Virginia, I wanted to provide a quick glimpse at some of the herpetofauna I found while island hopping. It is surprising to think how these animals made it to the islands via saltwater (predators and dehydration) and how they have been able to survey on dynamic ecosystems that are constantly flooding and changing habitat types. 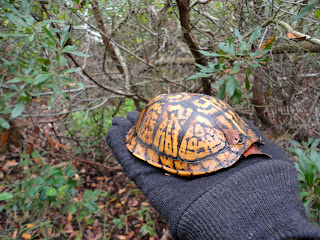 This Eastern Box turtle (Terrapene carolina carolina) was found on Smith Island, which is one of the southernmost barrier islands off of the Delmarva Peninsula. At it's closest point, the island is approximately 2.2 km from the mainland. That is a long way for a terrestrial turtle to go in a harsh environment. Given the number of storms that occur though, it is possible it got blown or swept there. Conant et al (1990) also hypothesized that the turtles might have been brought to the island when it was inhabited by humans up until the 1930s. It seems the population has been able to survive in the wooded areas. 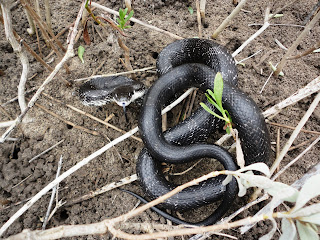 I also came across a rather feisty Black Rat snake (Elaphe obsoleta now Pantherophis obsoletus) while on Mockhorn Island. Mockhorn and Smith occur close together, and the snakes have been documented on Smith Island in the past. Interestingly, this individual was sunbathing on a rather cold and cloudy day. Perhaps it had planned poorly, for it was stranded on a small tump of high ground during high tide. For an instant I expected it to ask for a Marsh Rice rat from one of the Sherman live-traps. 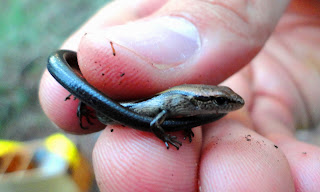 While doing surveys on the mainland, I was also able to glimpse this speedy Ground skink (Scincella lateralis)  "dancing" through the pine needles. These skinks are unusual in that they rarely climb, and they wriggle their body back and forth to move. They can grow up to five inches, so the one in my hand is not all that large. 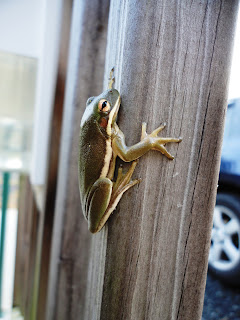 Switching gears to our amphibian friends, I came across two frog species while working around the field station. The first (above) is a Green Tree frog (Hyla cinerea). The second (below) is a Southern Leopard frog (Lithobates sphenocephalus). The fun thing about the Green Tree frog was that I watched it turn from a bright green to the olive green you see in the picture. This may have been due to an effort to camouflage or because it moved from the sun to the shade. The Southern Leopard frog is simply a nice looking creature. 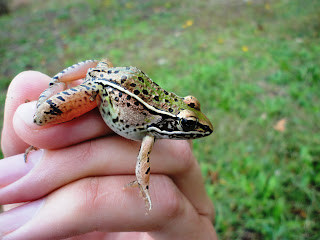