It is that fun time of the year where one day is sunny and warm and the next day it snows. While the seasons battle it out for spring's inevitable victory, wildlife are beginning to respond to the changing weather. Birds begin their migrations and add some variety to the resident birds that stayed through the winter. Those animals that hibernated or slumbered in their torpor are stirring. Perhaps my favorite of all is that of the vernal-pool breeding amphibians. Vernal, Latin for spring, describes wetlands that usually only exist during the springtime. These wetlands are typically filled by winter precipitation and snow-melt and are dry and gone by the end of the summer. This ephemeral existence means fish can rarely establish themselves, so amphibians can develop without fear of predation by fish. So, as these seasons change, let us say "see you around" to our winter friends and hello to our spring buddies. 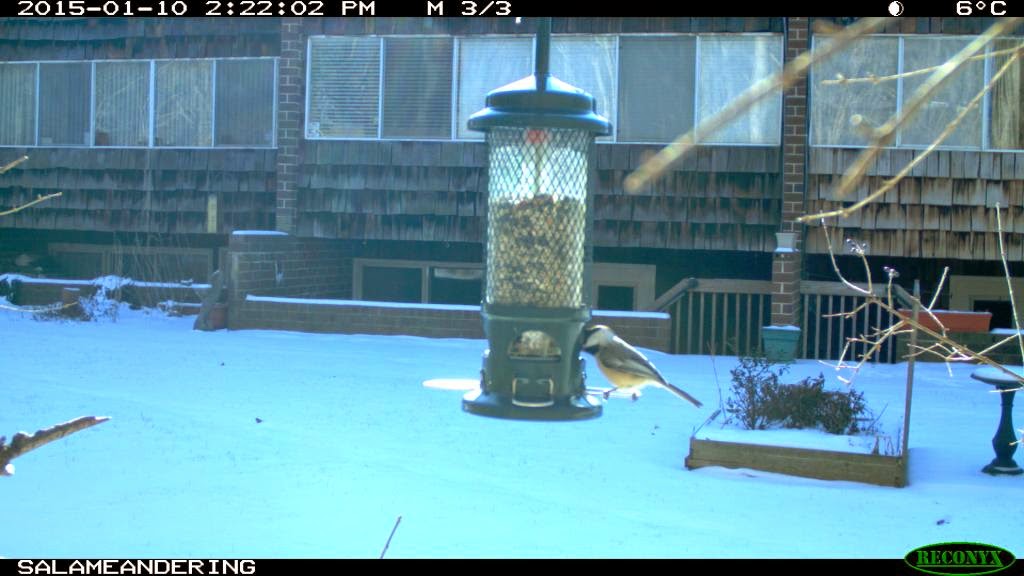 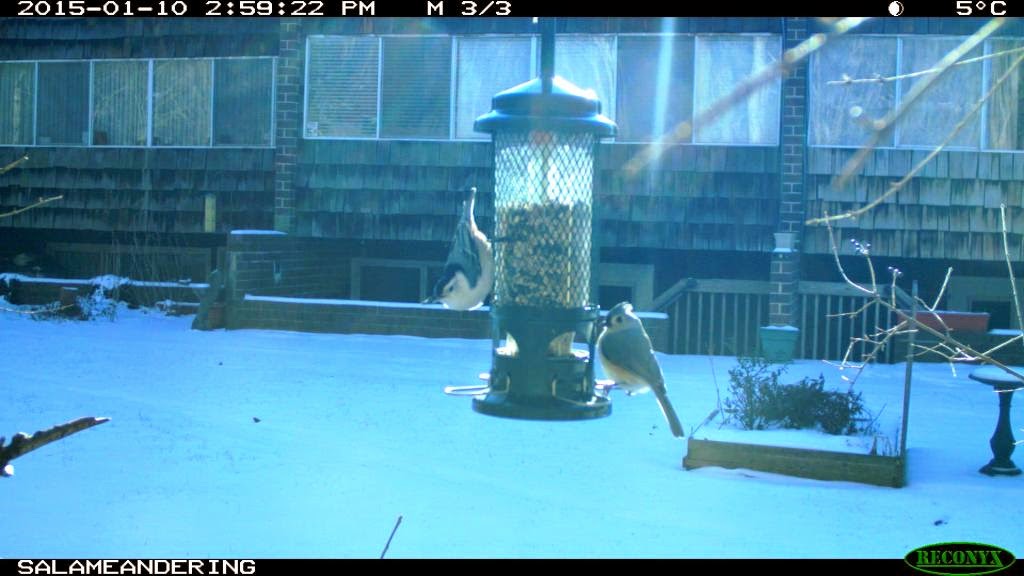 For the first time I tried to point my camera trap skyward, and while it didn't stalk the visitors of my bird feeder quite as well as I had hoped, I did catch some decent photos of the avian folks who spent the winter in the woodlot behind my townhouse. I am still a birding novice, but I did count eight species at my bird feeder this year. All of them are familiar faces to those who put up a bird feeder during the winter. Pictured above we have the black-capped chickadee (Poecile atricapillus,  meaning "spotted black-hair"). These common birds have dynamic brains, where they let old brain matter to die off each autumn so that new neurons can be formed to better match changing conditions.


We also have the white-breasted nuthatch (Sitta carolinensis) exhibiting the characteristic upside-down nuthatch position. As evidenced by this photo, white-breasted nuthatches visit feeders along with other birds. When the tufted titmouse (the other bird in the picture, Baeolophus bicolor, meaning "two colored little crest") is removed from feeding flocks, the white-breasted nuthatch is much more wary of bird feeders, indicating it relies on other birds to help watch for predators when feeding. Other favorites of mine this year were the dark-eyed junco (Junco hyemalis meaning "winter bird"), the house finch (Haemorhous mexicanus, meaning "Mexican fruit biter"), and the mourning dove (Zenaida macroura, meaning "long-tailed daughter of Zeus").


It's also time to welcome our early ectotherms. Here in the northeast, we most notably have the Jefferson's salamander (Ambystoma jeffersonianum) that will begin breeding even when vernal pools have ice covering them. As part of our research on the vernal ponds in the area, we often catch hundreds of Jefferson's salamanders. These salamanders are extremely slimy. The slime they excrete not only deters predators, but it is also thought that they use the slime to communicate chemically with each other. During the mating season, leaving a persistent scent trail may be helpful in courtship. By chance, when checking our traps this season, we found a midland painted turtle (Chrysemys picta marginata) who must of woke up too early!


As you can tell, I recently got access to an underwater camera and am taking full advantage of it.