With summer well under way, it's the time of year for critters of all sorts to be laying their eggs. Whether bird, reptile, or amphibian, hear are some of the eggs I've come across in the past few weeks. 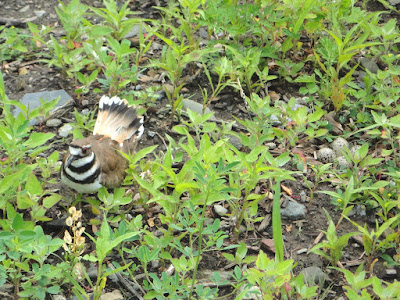 Killdeer eggs blend in nicely with the gravely areas they make their nests.
Four eggs are in the far right of this picture.

To start off, we have the fine-feathered shorebird, the Killdeer (Charadrius vociferus, "Noisy plover"). This bird doesn't have to be on the coast to be seen, and it is most well-known for its loud and frequent calling. Killdeer are ground-nesting birds, and their eggs are camouflaged for the gravel-like and sandy areas they like to lay. When threatened, a Killdeer guarding its nest will either fluff its feathers and tail to scare animals off, or it will pretend to have a broken wing so as to distract predators from its eggs.

Reptiles have been laying their eggs too. Instead of brooding eggs like birds, reptiles must lay their eggs in substrate that is warm enough to act like a natural incubator. This usually means sunny, dry, sandy areas. This common snapping turtle (Chelydra serpentina, "Snake-like turtle") exhibited an interesting behavior of shuffling her eggs around are depositing them each time. A snapping turtle's clutch can contain between 20-40 eggs.


As you know, I am a big fan of salamanders that breed in vernal pools. The Ambystoma genus of salamanders (Spotted, Jefferson's) laid earlier in April, and their eggs have been hatching over the patch few weeks. Unlike other eggs anywhere else, the eggs of Spotted salamanders have a unique symbiotic relationship with algae. So far, they are the only known vertebrate species that has a symbiotic relationship with algae. These algae, known as Oophila amblystomatis, not only invade the jelly of the egg, but they also invade the embryo and salamander tissue. The salamander benefits from increased oxygen and removal of ammonia waste during development, and the algae benefits excreted nutrients. Much is still not know about this relationship, but is clear that without the algae, eggs develop more slowly, have higher mortality rates, and produce smaller young upon hatching. 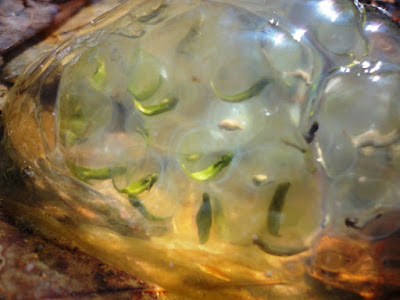 Algae covered Spotted Salamander larvae await to hatch at the end of May.


From a few months ago, underwater footage (couldn't help myself)
of Jefferson's salamander eggs. Notice, they lack the algae their close cousin's have.