Monsters in the Night

For many of us, once the sun goes down it is time to wind down and get ready for some sleep. For much of the natural world, though, it is time to become active. While there are a variety of activity patterns--diurnal, nocturnal, and crepuscular (during dawn and dusk)--we mainly only experience other animals with similar patterns to us.

One way to break from this daytime comfort is to go on a night hike. Not only is it a sensory challenge, but if you brave turning off the flashlight I'm sure you will have to re-confront some fear of the dark. Night hiking let's you experience familiar places through a whole new perspective of shadows, sounds, and imagination.

Or, if you get the chance like I did, you can explore unfamiliar places in an unforgettable manner. When I went to Costa Rica, I befriended a tropical zoologist named Andres who worked at the place I was staying. This friendship led to forays into the dark, damp rain forests of the Osa Peninsula. 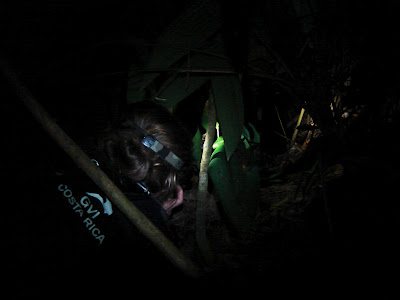 Andres scoping out a potential critter.
Using headlamps we would try and find any animal we could. By using headlamps, it is easier to see eyeshine, a reflection of light off of eyes that makes them appear to glow. The tissue in the eye that is responsible is the tapetum lucidum, and if you have taken a picture with flash of your dog, it is what can give them the glowing eyes.
Imagine walking along trails in the blackness of night in an exotic rain forest. Beams of light from the headlamp would reflect back little tiny specks of light. Was it a water droplet tricking us? Was it a frog? It moved! Chase it down! Scrambling through brush and leaves, we could only hope to snag the critter before it escaped. Other times, we would catch snoozing lizards who may not have chosen very sneaky hiding places. 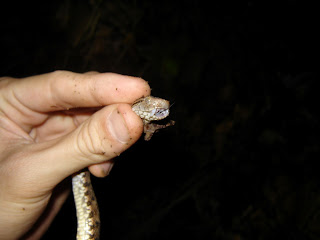 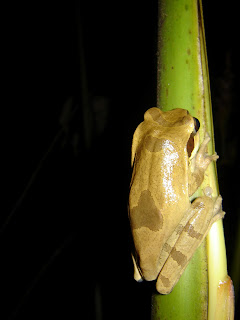 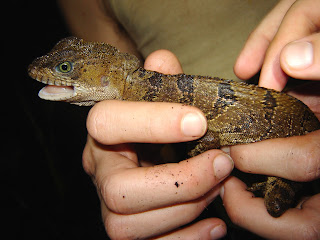 The shocked look of a snoozing basilisk. If we made too much noise walking around,
these lizards would jump from their perch in the trees into streams. (Basiliscus basiliscus) 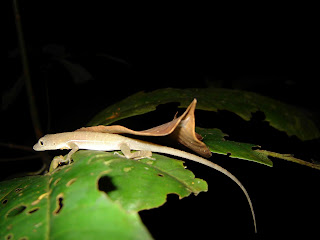 This anole wins the award for most inconspicuous sleeping spot.
The highly sophisticated lay-under-a-leaf strategy is being employed here. (Norops polylepis)
While the thrill of the search and the play of lights helped us find many of the critters, there was more to experience than the learning of species new to me. When we were tired, we took a rest near a small waterfall and turned off the headlamps. Resting on a log, conversation dwindled and the darkness continued to settle in. Even with my eyes adjusting, I could barely make out any shapes.


The glass frogs were calling, rain was dripping from leaves, the stream was murmuring, and the immensity of the rain forest became apparent. On this tropical adventure, it was hard to know what creatures were moving unnoticed under the cover of sound and darkness. Perhaps monkeys were creeping through the treetops, or perhaps the ocelot whose claw markings we had seen on a tree was stalking its prey. Whatever was there, my imagination enjoyed them as the monsters in the night.


If any of the herps pictured interest you, check out Jay M. Savage's The Amphibians and Reptiles of Costa Rica: A Herpetofauna between Two Continents, between Two Seas.