The Tale of Two Lovers

Mythology has multiple benefits. For those who believe, it can provide meaning and purpose. For those who study, it can shed light on the way humans perceive their experience and develop values. For those who enjoy, it can share its wisdom but also add another layer of intrigue and beauty to something we may already know about.


Hawaiian mythology is no different, and the tale of two lovers, 'Ohi'a and Lehua, adds a fine component of storytelling to an already fascinating plant: the 'Ohi'a Lehua tree (Metrosideros polymorpha). As the story was shared with me while I was in Hawaii, 'Ohi'a was a demigod who lived in the forest. Being a demigod, 'Ohi'a was highly attractive, and this made him catch the eye of Pele, the goddess of volcanoes and fire. Pele was so smitten by 'Ohi'a , that she approached him and asked for his love and adoration. What she didn't know was that 'Ohi'a already had a lover, Lehua, and so he refused the goddess's advance. Enraged by his disregard for her longing and love, Pele turned 'Ohi'a into a tree. 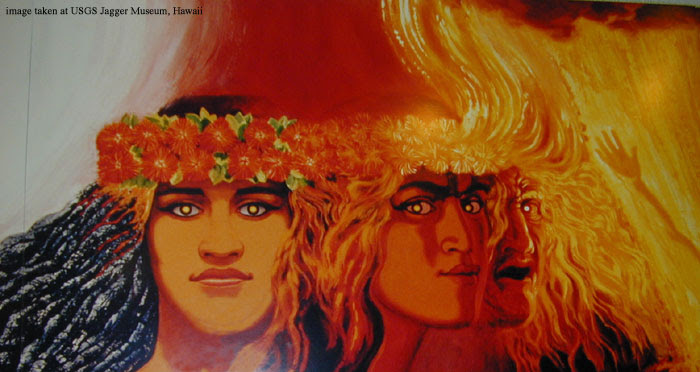 The goddess Pele and her ever-changing forms.
Courtesy of marinebio.net and the Jagger Museum at Volcanoes National Park

Lehua, once she discovered the spell that had been cast on her companion, went to Pele and begged for her forgiveness. In her lament, Lehua asked for 'Ohi'a to be turned back to his human form. Pele, despite her power, could not undue the spell, and took pity on Lehua. Thus, she turned Lehua into the red flower that blooms on the 'Ohi'a tree, keeping the two lovers with each other forever. And, as people say, it is looked down upon to pick the flowers from the 'Ohi'a Lehua tree, for you are separating the two lovers from each other once again. 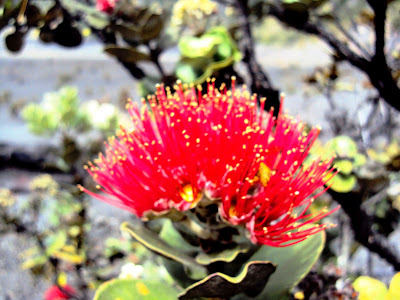 Lehua in her captured form, the red blossom of the ʻOhiʻa Lehua tree.


Ecologically, M. polymorpha is a unique species that is significant in both the final stage of succession, and the pioneering stage of succession. After fresh lava flows or cinder deposits, it is one of the first plants to recolonize a totally decimated area. It's seeds travel particularly well on the wind; therefore, it is able to disperse to remotes parts of the volcanic landscape. On the contrary however, the  'Ohi'a   Lehua plant is also one of the dominant trees in cloud forests and both wet/dry forests. It is unusual for a species to take a lead role both the beginning and the end of succession. Typically, as habitats mature into forests from shrub-lands, the types of plants found in the habitat will shift and change. Indicated in its species epithet, polymorphos, it is not too surprising the plant is so tolerant of varying conditions.Considering poly means "many" and morphos means "forms", the 'Ohi'a Lehua can appear as a tree growing to the height of 100 feet or as a shrub. 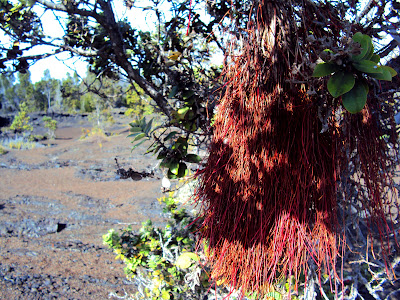 The plant also has other useful attributes. For instance, in order to
absorb more water from the moisture in the air, the tree will
grow aerial roots that will hang from the branches.
While the tree had many historic uses--construction, tools, weapons, boats--currently it is most renowned for its honey. So, if in need of some grand romance this Valentine's day, feel free to tell your sweet honey bee how your love is legendary like that of the 'Ohi'a Lehua tree. (Disclaimer: results may vary)


A handy resource about this species can be found at Pacific Island Agroforestry.
Posted by Piedmont at 3:46 PM