Well, this is the first post of what hopefully will become a good record of the adventures I've gotten to do as a budding ecologist (and the lessons I've learned from them). I'm not sure how frequent these posts will be, but nonetheless, stay tuned.


This past summer, I did what the average person does in the mountains of North Carolina--I looked for giant salamanders. Along with folks from the NC Wildlife Commission and the NC Zoo, surveys were conducted to find the giant salamanders. The elusive critter the surveys were aimed at was the Hellbender (Cryptobranchus alliganiensis). Don't worry, this isn't a monster that can manipulate the fires of the inferno (perhaps I've watched too many episodes of Avatar the Last Airbender). Their genus name is derived from kryptos "hidden" and branchos "gills". This accurately describes the folds of skin that cover the areas of oxygen exchange. Perhaps what common name you might enjoy even more is the "Snot Otter." These creatures win no conventional beauty contests. 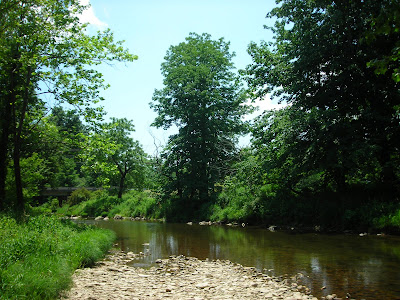 Hellbenders occupy swift moving streams in the Appalachian and Ozark mountains
as well as eastern parts of the Mississippi drainage.
These large, ancient salamanders can get up to 74 cm (29 in) when adults. In the clean waters they inhabit, Hellbenders stay hidden under rocks on the bottom, and they feed on anything from insects to crayfish. When competition is stiff or territory is trespassed, they will also eat each other. 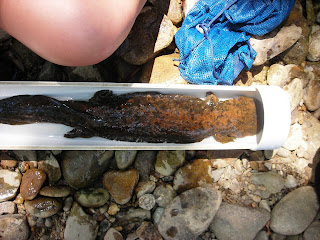 Hellbenders are important because of their role in the stream ecosystem, but they are also significant because they are "indicator" species. When water quality continues to decline, these dwellers of the creek begin to disappear. As you can imagine with the ever-expanding reach of human development, the streams Hellbenders inhabit are becoming dirty and chemically unfit for them to survive. This has led to drastic declines in Hellbender populations across their geographic distribution. They are the canary in the coal mine as far as these bodies of water are concerned.


The surveys I participated in recorded a  variety of information to determine the age, gender, and health of individuals that made up a population. Along with Passive Integrated Transponders (PIT) tags, this information helps monitor and assess the status of the population. PIT tags are tiny devices (essentially RFID chips) that are carefully inserted into the Hellbenders, and, with a tag reader, researchers merely have to walk along the stream bank to survey for past individuals. Data like this can give a sense of how long individuals survive as well as how the demographics of the population are changing.
So, my experience with these fascinating salamanders involved the fun task of snorkeling in mountain streams. As it was only the second time I've been snorkeling, the plain act of snorkeling was exciting in and of itself. Now, on top of that, I was searching for rare, giant salamanders. Never have rocks and boulders looked so much like presents to be unwrapped, for it was definitely a surprise to lift a rock and see these creatures looking back up at you! Catching a Hellbender is a tricky ordeal too. It's like trying to grab a wet bar of soap, except Hellbenders are even slimier and more slippery than soap--not too mention they tried their best wriggle out of your hands. 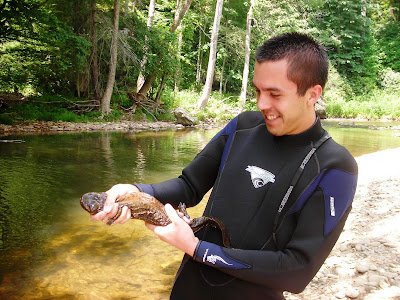 Never will mountain streams be perceived the same way again

Hopefully as more attention gets drawn to Hellbenders, more people will be concerned about the conservation of their habitat--a habitat that is home to numerous other salamander species, unique fish, and other wildlife.

For more information look at hellbenders.org or see Salamanders of the United States and Canada by James Petranka.